You don't need to wear a uniform to serve the country 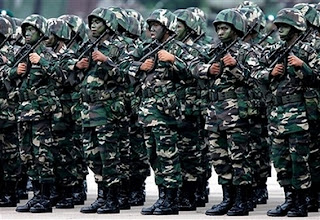 As a young Malaysian Chinese, I joined the air force in 1976. I remember it was May 1st that year when I arrived at Port Dickson camp.Later, came the rest of my comrades. It was about 300 of us then.The first month was tough. Not only physically, but to be accepted into the team was another thing.The Malay boys from the kampungs viewed us as Chinese communists. But the training itself had no discrimination. We slept and ate in the same hall, bathed in a common room and received collective punishment if we did wrong.After the second month we accepted each other as Malaysians and with one mission - to serve this nation. I remembered one night in the jungle. It was 4am in the morning and my Malay comrade had to cook his meal as it was Puasa month.It was raining very heavily. In order for him to cook and have his meal, I had to hold two sticks - one on each hand and laid a raincoat over it. This enabled him to prepare his meal. But I was soaked all over. It didn't matter because we were a team with one mission - to defend this nation.I decided to leave after 16 years with a heavy heart. My last drawn pay was RM800. This was in 1991. I received my Sergeant rank six months before my service ended, with an increment of $10.From the armed forces to the civilian world. I joined a multi-national company. From a maintenance engineer to manager.But it is not the position that matters.My contribution to all these companies, by training juniors and preparing them for the next level of responsibility and to eventually serve this nation, is what matters most.I have one Malay engineer under me and he has moved up the ladder in the corporate world. Is it not patriotism in another form?I gave my best 16 years of my life to this nation. (Defence Minister) Zahid (Hamidi), if you have nothing to say, please be silent. Silence is golden.Zahid, if you want to say something, please say something that will give positive energy to this nation.
By taipingmali at November 26, 2010