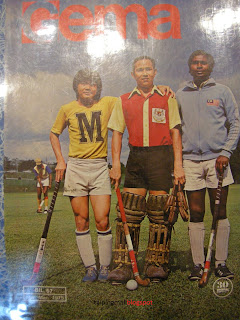 Earlier made a Datuk, akin to the British knighthood, Shanmuganathan was awarded the Darjah Datuk Paduka Mahkota Perak (DPMP) title Tuesday by the Sultan, who is both the royal and constitutional head.

He was Thursday feted by his 1975 teammate K. Balasingam, who recalled Shanmuganathan’s ‘tremendous contributions to the game, as a player, manager and coach’.

‘I am proud that his contribution has been finally recognized,’ Balasingam wrote in the New Straits Times.

‘As the captain, especially in the 1975 World Cup, he led the team exceptionally well. And who can forget the winning goal he scored against Holland, the reigning World Cup champion at the time, on March 14, 1975 at Kilat Club,’ Balasingam wrote.

India won the World Cup that year, defeating Pakistan. It was the only time India won, while Pakistan, which conceived the idea of the Hockey World Cup has won four times.

‘I am very honoured to have been in that team and we played really well under Shan’s guidance and that of our late coach Datuk Ho Koh Chye. The latter would have been very proud of Shan (as Shanmuganathan was popularly known).

‘We were the best assembled team and we delivered the results. Anyone who talks about hockey refers to the 1975 World Cup team with pride,’ Balasingam, also an ethnic Indian, wrote.

Malaysia is home to 2.1 million ethnic Indians who constitute eight percent of the 28 million population.
By taipingmali at April 22, 2011