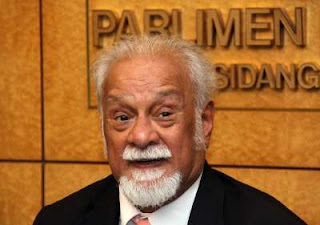 This was following the meeting Lim had with senior party leaders, including Karpal last night.

“We agree that the latest episode that has been highlighted by the BN-controlled media has ended,” he added.

Last Sunday, Karpal reportedly lashed out during a press conference at the party’s disciplinary committee for clearing his arch-nemesis Ramasamy on accusations that he had breached party discipline last December when he led a demonstration against DAP leaders.

According to various media reports, Karpal said the four-man committee, led by its chairman Tan Kok Wai, was unfit to hear the case as it involved Ramasamy, who is also a panel member.

The veteran politician said the four should have excused themselves from the case and new members should have been appointed in their place.

Following the report, Lim (picture) had said he and other party leaders will seek a meeting with Karpal over the next few days to discuss the long drawn-out spat that started some time last year.

He said it was the shared sentiment of all DAP members that the matter should be resolved internally and not in the public sphere.

Karpal and Ramasamy, who is also a DAP deputy secretary-general, first came to loggerheads with one another last year when the latter purportedly listed himself and three others as candidates for the coming general election. This riled Karpal, who shot back at Ramasamy for making such a decision when it was not his place to do so.

In the ensuing verbal exchanges between the duo, Karpal labelled Ramasamy a “warlord”, while the latter responded with a “godfather” tag on the former.

During the party’s state convention last December, a group of protesters claiming to be in support of Ramasamy held a demonstration, leading to a complaint filed by 33 members against the Penang deputy chief minister II with the disciplinary committee.

The committee however cleared Ramasamy of the charges on March 12, saying there was no direct evidence to prove his involvement in the protest.

Lim, who is also Penang chief minister, today urged all DAP members to close ranks and stay focused “on the historic opportunity for change to save Malaysia in the coming general elections”.

“All party leaders and members should stand united together so that our political enemies will not attempt to exploit the situation by organising demonstrations against the DAP or DAP leaders on one pretext or another,” he said.