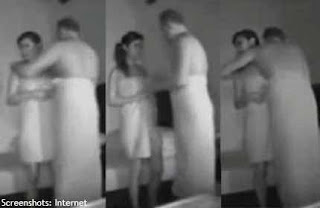 The sex video still hangs like a dark cloud over Datuk Seri Anwar Ibrahim although his wife has declared that he is not the man wearing a white towel and a big smile.

DATUK Seri Anwar Ibrahim was in Sarawak for a great part of the last fortnight. He was lucky in that sense, otherwise he would have had to face the fierce glare of the media spotlight in the peninsula.

Over in Sarawak, people are not really clued in to the sex video. They do not care whether Anwar is or is not the man in it because they are not really into him. Sarawakians have their own heroes and Anwar was never, and is not, one of them.

As such, the PKR de facto leader has not been harassed the way he would have been back home when a trailer or teaser of the sex video went viral on the Internet on Monday.

At that time, he was campaigning in Sibu and his reaction was angry and defensive: “Whether or not the (man in the) video looks like me, I don’t care. It wasn’t me.”

After that he went off to lend support to his party candidate Baru Bian in Ba’kelalan, which is as far out in the wilderness as one can get in Sarawak.

By the time he returned to Kuala Lumpur, a new controversy had erupted.

A Malay Selangor Customs officer who was being investigated for corruption had died after falling from the third floor of the MACC premises in Jalan Cochrane, Kuala Lumpur.

The uproar over the sex video had been superseded by outrage over the tragedy.

Anwar definitely needs some down time. The video issue has hit him hard, especially after the trailer went public.

It was all that most people could talk about, regardless of whether they thought the smiling man in the white towel with the smart hairstyle looked like him or was somebody else.

He looked stressed out and distracted. He has lost weight and if he were to show off his abdomen the way he did a couple of weeks ago, it would look flatter than ever.

In unguarded moments, his face appeared drawn and tired and his moustache and goatee looked greyer.

His saviour came in the form of Datuk Seri Dr Wan Azizah Wan Ismail who has made a spirited defence of her husband.

When asked about the authenticity of the video, she shot back: “Tulen, tak tulen (genuine or not genuine) is not the issue. It’s not Anwar in the video.”

She is the proverbial good wife and she is standing by her man. Key family members, her father Datuk Wan Ismail Wan Mahmud and her daughters Nurul Izzah and Nurul Nuha were by her side. The family is sticking together.

Her loyalty is crucial for Anwar. It is his way of saying that no woman would take this if it were true, that means I am innocent.

But nothing is conclusive for now. The police are still investigating and all those calls for a commission of inquiry will remain calls until the police complete their work.

Anwar has some breathing space until then.

Public sentiment had been with him following the exclusive Carcosa screening of the video. The reason was that the trio – Tan Sri Rahim Tamby Chik, Datuk Eskay Abdullah and Datuk Shuib Lazim – are not what the public would consider persons to moralise about others. Rahim and Eskay carry too much baggage.

Anwar knew that. When speaking at ceramah, he would bang the rostrum as he said, “Rrraheeem (thump!) Taambeee (thump!) Cheeek (thump!),” and his audience would applaud and cheer.

But public sentiment is a very fluid thing. Sentiment has shifted somewhat since the video teaser came out.

A common opinion among those who have watched the video is that the man looks like Anwar. But they cannot be completely sure that it is Anwar, at least until they have seen more of the video.

Or as one government servant put it, “It is difficult to say it is not him.”

It is still a mixed bag of views out there but the mood is quite different from that which had prevailed immediately after the video came out.

One PKR leader admitted: “My heart nearly stopped when I first watched the clip. Then I watched it again and I decided it was not him.”

Sungai Petani MP Johari Abdul, one of two PKR leaders who have viewed the sex video in its entirety, has maintained that he does not believe the man in the video is his de facto leader. Johari is a much sought-after speaker on the PAS and PKR ceramah circuit and has even shed tears when speaking about it.

Shuib, one of the Datuk trio, is Johari’s uncle.

Johari called the whole thing, “acar seks yang busuk (gutter of sex)” and said that he wants “everyone to know the truth”.

He has demanded that those behind the video be prosecuted, he wants the accusations against Anwar to stop and he is furious at the way several newspapers reproduced clips from the video on their front pages. The black-and-white pictures were not explicit but they were quite distasteful to some people.

But Johari has stopped short of supporting a call for a commission of enquiry into the video. And that is the most puzzling part of the sex video affair.

Those who have come out to defend Anwar have skirted around the need for an inquiry to prove the authenticity of the video. These are intelligent professionals who have often demanded for royal commissions of inquiry into issues of national interest.

It is as though they are afraid of what will happen if the video is shown to experts for verification. They seem to prefer the prospect of doubt hanging over Anwar rather than clear his name – and the path to Putrajaya.

It is good to have the trust and support of one’s wife. But, as Minister in the Prime Minister’s Department Datuk Seri Nazri Aziz said, an aspiring prime minister would also want the people’s confidence.

Right now, Anwar is stuck somewhere between night and day.

“His supporters should clear his name by proving that he is not in the video. The three men are not credible; the way they did it was bad. But the fact that they came out so openly shows they are very confident about what they claim. They are risking prosecution and legal action. If it is not true, Anwar should sue them,” said Terengganu businessman Datuk Wan Albakri Wan Mohamad.

Many in PKR were quite upset when Anwar’s lawyer Karpal Singh suggested that the video be viewed in Parliament.

It is the same principle that lent Johari the locus standi to claim that Anwar is not the man in the video.

But the conspiracy theorists immediately went to work, claiming that DAP was out to do Anwar in and that Karpal was the hitman. That was pretty ridiculous because DAP needs Anwar to keep their marriage with PAS from breaking up.

Gobind Deo Singh said his father was merely being consistent.

“He made the same call during the Vijendran video tape issue. There is no conspiracy,” said the Puchong MP.

There is a more logical reason for Karpal’s action: the past had caught up with him at a most inopportune moment. The lawyer politician was under pressure to defend his integrity.

His critics were questioning what they saw as his double standards on issues. He had pressed for a viewing of the D.P. Vijendran sex tape years ago, so why is he not doing the same now?

And before this, critics had asked him to explain claims he had reportedly made more than 10 years ago about having evidence on Anwar’s sex life and why he is now Anwar’s defence lawyer in the sodomy trial.

DAP politicians said Karpal was just being Karpal and that he was merely speaking his mind. They say he does the same thing at DAP meetings and that no one, not even the top guns, are spared.

It is only a matter of time before the rest of the video is leaked.

When and how remains a matter of speculation.

The trailer footage has spooked some of Anwar’s allies in Pakatan Rakyat. It has cast doubt in their minds and many of them are clearly refraining from further comment or commitment until they have seen more of the video.

They are not blind loyalists. Their ties with him and PKR are purely symbiotic – you help me, I help you.

Nothing is permanent in politics and they are not going to carry the cross for him forever and without getting something in return.

“It would be reassuring if Kak Wan could show us the watch,” said one DAP politician.

The whereabouts of the Omega watch is still a big mystery. It is apparently a rather special watch that bears the insignia of a foreign royal family.

Eskay claimed to be in possession of the watch whereas Anwar claimed the watch is with Dr Wan Azizah. Everyone is waiting to see who will eventually produce the watch and who between the two is telling the truth.

Anwar has often been described as the consummate political animal but he is more like a cornered animal these days. He is fighting too many fronts and trying to put out too many fires.

The video issue has been what in economics is known as a Black Swan, something unexpected and unpredictable. Anwar was completely blindsided.

There are people out there asking for more of the sex video for reasons of their own. But more of the video is not necessarily going to be good for Anwar.- The Star
By taipingmali at April 10, 2011