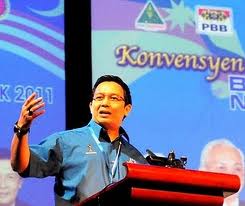 “Thank you for helping us in the campaign during the state election however, it does not give you any right to interfere or meddle in the management of Sarawak politics.

You (Khairy) are obviously out of your line in making such a demand,” said Wan Hamzah, who is the Senior Personal Secretary to Deputy Speaker of Parliament Datuk Dr Haji Wan Junaidi Tuanku Jaafar.

“As a politician, Khairy should know better from the results of the state election where PBB, led by Pehin Sri Haji Abdul Taib Mahmud, won all the 35 seats it contested, with bigger majority in most constituencies, clearly indicates that the people’s strong support for behind him (Taib).

“We welcomed those who helped us during the campaign but we don’t compromise with those who did not respect the wishes by our voters,” he said.

Khairy, who is also Member of Parliament for Rembau, had commented in his Twitter feed-microblogging website that there should not be any delay in the transition plan.He said the state BN leaders must adhere to the promise of power transition in the near future and there should be no reason to delay it.

Wan Hamzah, who is also PBB Demak Laut Youth Chief was commenting on Khairy’s remarks, after a meeting on the proposed plan to build Santubong Mosque chaired by Wan Junaidi, who is also Member of Parliament for Santubong.

Meanwhile, Wan Junaidi, when asked to comment on the matter, said that the question of when Taib would be stepping down should not arise as it had been discussed with Prime Minister Datuk Seri Najib Tun Razak.

“Although we are a democratic country, the matter of transition of power in Sarawak should have not been discussed at the grassroots level.We should respect Pehin Seri’s decision and it is up to him to announce when he is ready to step down.

“Pehin Sri had said that he had identified his successor, so it is just a matter of time for him to hand over power to his successor,” said Wan Junaidi.
By taipingmali at April 22, 2011