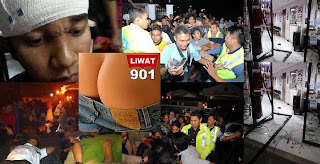 From the spiritual point of view, Anwar imprisonment is a loss of the NLD, the NLD, after all, from the three major political parties, different packaging, the Islamic Party stressed that Islam, cast a veil of mystery inhumane;

Action Party has a strong facade Chinese color, indigenous voters is difficult to fully accept; to just safety Huawei's first party, UMNO's role in addition to checks and balances, but also to reconcile the people associated with the image of religion and race, let the voters of all ethnic groups feel at ease.

From the perspective of political opportunities, 308 master after a lot of the NLD, although the BN weaknesses, no one from the perspective of a lasting power of rendering, but also rarely get universal resonance, You Qizheng, economic, cultural, teaching people to understand everything small, there is a weakness for everything people less empathetic, Anwar sodomy case set in the body, just fermented into national issues, especially in-depth indigenous.

Authenticity is no longer important case Shows the results of sub-contractors Anwar is no longer a personal matter, although UMNO in the country shouting "Jangan Guna Rakyat Untuk Selesai Masalah Peribadi", when the sodomy case involved a political star, coupled with political commentary can be logical premeditated, it has become the ruling and opposition parties saw the chips, the authenticity of the case is considered no longer important.

In addition to sodomy case accused, Islamic oath of drama, there are a lot of sex without the use of legal channels of video, personality destruction Anwar is almost one of UMNO's platform over the years. UMNO believes will be sent to prison,

Anwar, Malaysia's ruling UMNO continue to sit back and relax, and then the collapse of the harmony and confidence of the people associated surface, the collapse of the NLD into Putrajaya; the general public had an idea that Anwar could not escape unscathed, he jail and discontent caused by political confrontation, certainly can not be estimated.

First, regardless of judicial independence, the country in terms of one case of delay in long array, if sentenced Anwar not guilty, then the people associated with the grievances investigated, the Barisan Nasional may not be able to withstand before the election, the BN case the whole story seem to be asking for trouble , as the Cantonese in the "catch the worm into the ass." In view of this, both the case of Anwar sodomy charge is substantiated, the National Front has been riding a tiger, unless there is better or worse platform to divert attention, or short-term Prime Minister certainly will not hastily dissolved parliament, for the 13th general election.Please read the Chinese newspaper today
By taipingmali at Januari 11, 2012