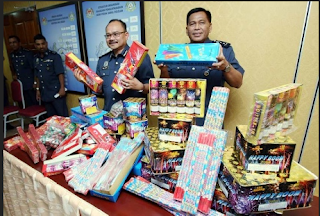 The Perak Customs Department scored its biggest firecrackers and fireworks bust for this year with the seizure of the banned items worth more than RM700,000, including in unpaid duties.

The raids were carried out at two separate locations in Penang and Taiping on July 5 and 17 respectively. State Customs director Ab Hamid Salleh said all the seized goods, worth RM777,595.50 including in unpaid duties of RM306,325.50, were believed to be stocks for the upcoming Hari Raya festivities.

He said acting on a public tip-off, a group of Customs officers from the Pengkalan Hulu enforcement branch conducted an initial inspection and found banned firecrackers and fireworks in a container that was being unloaded at the North Butterworth Container Port in Penang at about 5pm on July 5.

"The container was then brought to Pengkalan Hulu and further checks found that the firecrackers and fireworks of various types were packed in 1,190 boxes.

"The seized items have a value of RM451,100 and unpaid duties worth RM293,215," he told a Press Conference at the Wisma Kastam here yesterday.

Ab Hamid said further investigations indicated that the contents of containers had been declared in the manifest as furnitures.

He said no arrest has been made and investigations are underway to identify those responsible in bringing in the firecrackers and fireworks, which are from China.

In yet another success, Ab Hamid said enforcement officers from the Ipoh branch apprehended two local men in their 20s and 40s and seized firecrackers and fireworks worth RM20,170 after inspecting a one-tonne lorry at the Ipoh - Butterworth trunk road near the Taiping Utara Toll Plaza on July 17 at 11.41pm.

"Both men have been released on bail under the provision of Section 116 of the Customs Act 1967," he added.

Ab Hamid reminded the public that the import of firecrackers and fireworks were banned under the Customs (Prohibited Imports) Regulations 2008 except with a police permit.

"If convicted, those responsible can be fined between a minimum of 10 times and a maximum of 20 times the value of the seized goods or jailed for up to three years, or both," he said.