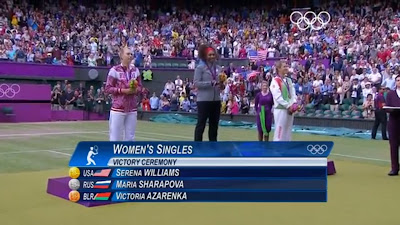 WIMBLEDON, England -- As Serena Williams stood atop the medal podium, her career Golden Slam complete thanks to an Olympic rout, the gusty wind on Centre Court blew the U.S. flag off its pole midway through the national anthem.

Old Glory came to rest in front of the Royal Box.

"It was probably flying to come hug me because the flag was so happy," Williams said.

Williams wore a smile herself after she became only the second woman to achieve a Golden Slam, winning the most lopsided women's final in Olympic history Saturday by beating Maria Sharapova 6-0, 6-1.

The victory completed a remarkable run of domination by the No. 4-seeded Williams, who lost only 17 games in six matches en route to her first singles gold medal. She went 13-0 this summer at the All England Club, where she won her fifth Wimbledon title a month ago.

It took the No. 3-seeded Sharapova 45 minutes to win a game, and by then she trailed 6-0, 3-0. Williams dominated with her serve and repeatedly blasted winners from the baseline, taking a big swing with almost every stroke despite the windy conditions on Centre Court.

Williams said the tournament was the best she has played from start to finish.

"I was so focused here," she said. "I remember I was serving and I was thinking: ‘Serena, this is your best chance to win a gold medal. You're at Wimbledon, you're on grass, you play great on grass, pull it together, just win this.' And that's

what I thought about."The career Golden Slam was first achieved by Steffi Graf, who did it when she won at the Olympics in 1988 after sweeping all four major titles.

Williams can add the gold medal to her 14 Grand Slam singles championships, the most of any active woman. She's the first player to achieve a Golden Slam in both singles and doubles.

And she's not done in London. Williams and her sister Venus, pursuing their third gold in doubles, beat Maria Kirilenko and Nadia Petrova of Russia 7-5, 6-4 in the semifinals. Their opponents today will be Andrea Hlavackova and Lucie Hradecka of the Czech Republic.

Sharapova completed a career Grand Slam in June by winning the French Open, but Williams beat her for the eighth consecutive time. The most one-sided previous women's final was in 1920, when Suzanne Lenglen of France beat Dorothy Holman of Britain 6-3, 6-0.

Top-seeded Victoria Azarenka of Belarus won the bronze by beating No. 14-seeded Maria Kirilenko of Russia 6-3, 6-4. Sharapova's loss allowed Azarenka to retain the No. 1 ranking.

Roger Federer will try to complete a career Golden Slam when he plays Andy Murray of Britain in the men's final Sunday.

Two hours after Williams completed her Golden Slam, twins Mike and Bob Bryan of the United States achieved the same feat, beating Jo-Wilfried Tsonga and Michael Llodra of France to win the gold in doubles, 6-4, 7-6 (2).

Williams took charge of her final from the start, sweeping the first eight points. The crowd wanted to see a contest and saved its biggest cheers for the rare occasions when Sharapova won a point.

Mostly she was lunging or whiffing as the ball whizzed past, or caught off-balance trying to block back shots at her feet. Williams finished with 10 aces, 24 winners and only seven unforced errors.

There was no giving up by the Russian, one of the most dogged players on the women's tour, but there was no letup from Williams.

"Against Maria, if you give her any hope, she's trying to come back," Williams said. "She won that one game and I could see her pumping her fist, and I was like, ‘Oh boy, here she comes.' It was really important for me to almost go out there and just do everything."

When Williams ripped a return winner for a 2-0 lead in the second set, she screamed "Come on!" as if trying to jump-start her game.

She had a similar outburst two games later after whacking a winner to erase a break point, one of only two she faced. She was broken just once in the tournament.

One point later, someone else hollered, "Maria, I still want to marry you."

Soon Williams closed out the victory with her 60th ace of the tournament, then let out a long scream. After shaking hands with Sharapova, Williams hopped a dozen times on the grass she loves, waved and then hopped some more.

Williams was still hopping as she put on her Team USA jacket for the medal ceremony. Then she began to dance.

"I don't think I've ever danced like that," she said. "I don't even know where the dance came from."