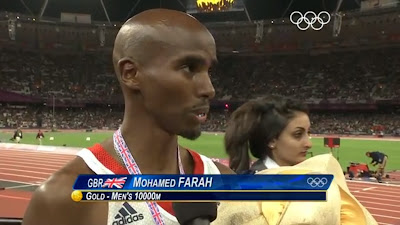 A son of Somaliland Mohamed Farah has done his motherland of Somaliland and adapted Great Britain great after he stormed to Olympic 10,000m gold to seal an extraordinary night for British athletics in the Olympic stadium.

The 29-year-old world 5,000m champion ran a near-perfect race to cross the line in 27 minutes 30.42 seconds, with his training partner Galen Rupp in silver and Ethiopia's Tariku Bekele in bronze.

Four years ago in Beijing, Farah failed to qualify for the 5,000m final, and in that moment of defeat vowed to give everything he had to become the best in the world.

On Saturday that undertaking came to glorious fruition as he was roared to unforgettable victory by 80,000 ecstatic supporters.

Farah, who was joined on his lap of honour by wife Tania and daughter Rihanna, said afterwards: "I just can't believe it, the crowd got so much behind me and was getting louder and louder.

"I've never experienced anything like this - it will never get any better than this, this is the best moment of my life.

"It doesn't come round often and to have it right on the doorstep and the amount of people supporting you and shouting out your name."

Mike McLeod was the last Briton to win a 10,000m medal with silver in 1984, but no British male has ever before won a global title at this distance.

"Mo went in with a race plan and he learned from last year. He showed great enthusiasm and guts. I am really pleased for him because he had a lot of expectation on his shoulders. He was expected to win and he came through."

At 5,000m Farah was comfortably set in a large pack going round at a tough but not brutal pace, the leaders going through in 14 mins 39.5secs.

Tadese went to the front with 11 laps to go before Kenya's Moses Masai picked it up 400m later and tried to stretch the field out with a lap of 63.8secs.

Wilson Kiprop had already dropped out injured, and Farah stayed on Bekele until, with five laps to go, he made his first move and eased up to third.

To an enormous roar from the crowd Farah then accelerated again at 8,800m and followed as the younger Bekele brother Tariku went to the front.

Farah looked effortless, poised, and with 800m to go held his position in the front two.

At the bell he made his big move, bursting into a lead of a metre on the straight and then kicking again with 90m left to go away clear.

It was an almost unreal end to the most astonishing of nights - and Farah still has the 5,000m to come.
By taipingmali at Ogos 05, 2012