ACT NOW AND STOP THE SIMMERING FLAME OF ARAB SPRING 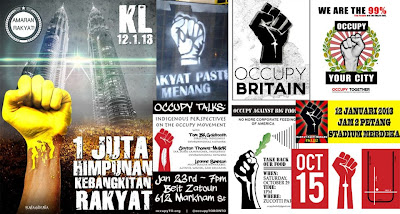 “We will take to the streets and take over Putrajaya. If we really want to overthrow them, there is no other way. Democracy does not work,” Haris Ibrahim from ABU (Anything But Umno) told a 1,500-strong crowd at a forum last night.

This is outrightly seditious, blatantly going against the country’s Constitution and inciting riots.

And at present, Anwar Ibrahim is talking to rallies all over the country inciting the people to go on an uprise or do an Arab Spring.

And then there is a plan to hold a one million people rally in Kuala Lumpur soon.

So what are the government and the police doing? Are they just continue to monitor the situation until some one crazy or a madman throws a stone about the people in the rally which can start physical riot?

Is it not the time to call in those organisers and even Anwar himself, dteian them for questioning and put up a few papers for the Attorney-general Chambers to institute charges?

Isn’t Anwar inciting a riot against the duly election government of Barisan Nasional as the recently concluded general election revealed?

This is not a time to wait until someone mad or crazy begin making the rally physical and then act.

The new Cabinet that will be effective on Thursday should make this subject the first and most priority in the agenda and act swiftly.

Najib Tun Razak as Prime Minister should no longer be moderate on this one issue which needs no second thoughts as the situation is getting out of hands.

Anwar challenges the very democratic system that the country and her people have been holding on from before Independent and this secrecy should be uphold and maintain.

It is time to act against Anwar and all those who follow him day and night around the country inciting an uprise or an Arab Spring.

This is not the time to reflect on Anwar being obsessed or mad or crazy or being made used of by the American imperialist or whatsoever.

This is the time to just detain and arrest because the people of the Malaysia has spoken through the ballot boxes and whoever does not agree should go to the courts of law.

Rallying and inciting further hate to create an uprise should be stopped right now…not tomorrow or next day or day after.

Because once the uprise begins, there will be no stopping until Anwar become Prime Minister.

So act now and swiftly – it is the responsibility of the duly elected government to stem out the simmering fire before it becomes a flame that cannot be extinguish.