PERKASA TO DEMAND FOR QUOTAS TO REVERT TO ORIGINAL POSITION 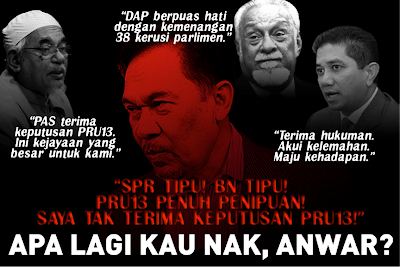 PERKASA, the most vocal Malay NGO born when Umno was at its lowest ebb after being beaten badly following the 2008 general election, has not thrown away the towel as yet.

Founded and headed by former Umno leader and known rebel-rouser since student days in the 70s Ibrahim Ali, Perkasa has decided to ‘lay off’ politics and focus on its struggle in protecting the rights of bumiputras and Malays and Islam.

Ibrahim had said last week that he was taking leave to reflect on his position after he lost the Pasir Mas parliamentary seat in the recently concluded general election that he held since 2008 general election.

Dejected and disappointed over his defeat, Ibrahim had said he had given everything to safeguard the bumiputras, Malays and Islam but losing the Pasir Mas seat was reflective of his effort being unappreciated and shunned.

Beside Ibrahim, Perkasa vice-president Zulkifli Nordin was parachuted down in Shah Alam parliamentary seat in Selangor and lost to PAS Khalid Samad.

But Perkasa however, as an organization will continue to focus on its objective until Ibrahim returns from his leave to lead.

The organization secretary-general Syed Zain Hassan said Perkasa would be as vocal as before and would continue to be so minus ‘politics’.

“Right now we will continue to voice our disagreements or agreements on government policies as well as making demands so safeguard the interests of bumiputras, Malays and Islam.

“For now, since after the general election where we know that the Chinese are not with the government despite the ruling coalition’s deeds, we call on the government to stop giving new benefits or gifts to the Chinese.

“But we also call the government to make new promises or new ‘gifts’ since we know where the community stands.

“Let us be practical about the situation and be real and truthful to ourselves.

“At the same time, Perkasa also wants the government to revert to the original whatever bumiputras and Malay privileges taken away and given to the Chinese.

“Example the JPA (Public Services Department) scholarship where in 2008, bumiputra and Malay quota was 95 percent but in 2009 brought down to just 50 percent to accommodate the Chinese.

“We demand back the original 95 percent because the Chinese community did not show any appreciation for the gift,” he added.

Syed Zain also said Perkasa would call on the government to focus more on the development of bumputras and Malays in every aspect since this group of Malaysians were the ones left far behind compared to the Chinese community.

“The fact is bumiputras and Malays still support the government despite the ruling coalition focuses more on Chinese and after the recently concluded general election, we feel it is better for the government to revert to the old policies.

“Look around and see who are better off in every aspect of life and who are far behind and who gave full support to the ruling coalition despite it (government) focusing more on those whose life is better off.

“We in Perkasa will pursue our objective and we will not back down.

“The answer to whether Perkasa is still relevant now and the future is a yes.
“In fact, at the present political landscape, Perkasa is more relevant than before,” he said.

Ibrahim is expected to return in a few months’ time to lead Perkasa and this time, Perkasa is expected to be more vocal that will add colour to the already colourful Malaysia’s political scenario where divisive politics seems to be the order of the day.


As the saying goes, an injured tiger is more dangerous when confronted.