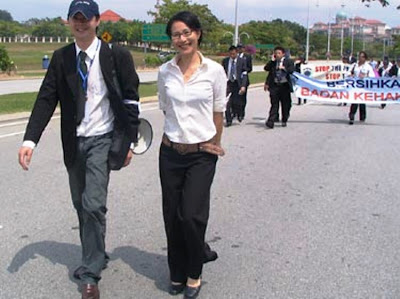 KUALA LUMPUR, Feb 22 - Elizabeth Wong was better noted for her passion for the environment and commitment to social justice and human rights before pictures of her semi-naked were circulated on the Internet.
Now, friends have started to flesh out the unusual life of the 38-year-old Selangor assemblywoman better known as Eli.
A graduate in fine arts from Sydney University, Wong is said to chain smoke, and play the guitar, violin and piano. She loves cats and was once a national swimmer.
Friends also spoke of her as “highly principled” – she refused bribes from developers when she was in charge of the environment portfolio.
“Her habits such as sleeping late at 2am or 3am, waking up late, chain smoking and everything else are things that her activist friends are used to,” said a former colleague, S. Arutchelvan, who has known Wong for more than 12 years.
“But behind her public image, she is an environment lover, a cat lover, a musician ... and a human rights defender, whether for illegal immigrants or anyone who is a victim.”
Former executive director Cynthia Gabriel from the human rights group Suaram described her as fearless.
“She’s uncompromising when it comes to what she believes in,” said Gabriel, who has known the opposition politician for more than a decade.
“She had performed excellently in her portfolio and seeing what happened to her is very difficult to accept.”
Wong rose to political stardom when she contested last year’s March polls for a state seat in Selangor on the opposition Parti Keadilan Rakyat (PKR) ticket for the first time and won.
She was then appointed the state executive councillor in charge of environment, tourism and consumer affairs.
But her political career came to a grinding halt on Feb 13 when some newspapers published pictures of her sleeping alone in her sarong.
The pictures were believed to have been taken by her former boyfriend Hilmi Malek, who is believed to be in Indonesia now.
She offered to relinquish her posts. But the PKR said no and she is said to be on holiday at present.
Friends and former colleagues believe that she will soon return to action.
Indeed, Arutchelvan said that Wong is dedicated to her work and principles.
“When I was working with her, she would spend the nights in the office if she had to,” he said. “If I were to call someone in the middle of the night or early morning, I would call Eli because she would be one of the only comrades still awake.”
Wong was also a human rights fellow of Carnegie Council for Ethics in International Affairs.

“After she became a state executive councillor, she complained to me that developers tried to offer her gifts and expensive chocolates but she said she totally ignored them,” Arutchelvan said.
He also described her as well read.
“In fact, she is one of the most intelligent state executive councillors in Selangor,” he said. “Her house usually looks as if it has been hit by a typhoon with her things sprawled everywhere. But the only two things that stand out as they are neatly arranged are her books and her photos.

“She loves taking photographs as a hobby and she has a passion for the arts.”

Her blog has a section titled Aufheben, which she says is a German term that the philosopher Hegel used “to explain the synthesis one would come upon after creating thesis and antithesis”.

A section about herself says she “enjoys looking at the paradoxes and intricacies of democracy and politics. In her spare time, she researches and writes on the War on Terror and security in the region. Her interests are in political imagery and symbolism, history, South Asian politics, resistance and Islamism in South-east Asia, technology and the politics of change”.

Another old friend, Anne James, questioned the motives behind the release of the photos.

“The scoundrels who are accusing her should look in the mirror themselves,” she said. “Is lying in the nude worse than raiding the state coffers?”

James said she hoped Wong would return to her post soon.

“Politicians like her are few and far between,” she said. – Straits Times
By taipingmali at Februari 26, 2009