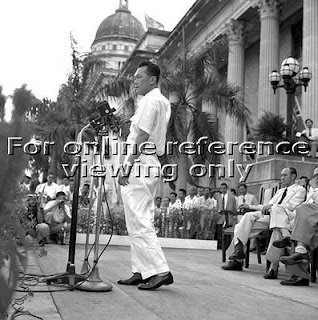 At 87, Singapore’s Minister Mentor is set to win the Tanjong Pagar constituency, a seat he first won 56 years ago, and retain his record as one of the world’s longest surviving leaders – although as an ‘adviser’ to the Cabinet.

With the coming election tipped to swing against his governing party, the founding leader, Lee Kuan Yew, who is 87, has signalled his intention to continue in office.

Speaking with a slight slur and looking his age, Lee posted his message in a low-key video that answered a burning question in almost every Singaporean’s mind – and a few foreigners, as well.

“I’m happy to be still representing Tanjong Pagar,” Lee said, referring to the constituency that he first won 56 years ago.

It was posted inconspicuously among other candidates’ messages on the People’s Action Party (PAP) website without an accompanying story.

The pro-government press gave it scant prominence, and many Singaporeans first read about it in a Yahoo news report.

This means that if re-elected – as he will likely be – Lee will retain his record as one of the world’s longest surviving leaders, although as an “adviser” to the Cabinet.

Lately, the elderly politician had stayed out of the public limelight, speaking less and less, raising speculation that he may be preparing to step down.

The low-key treatment was probably by design.

“I think they want to project the retention of the 87-year-old Lee as a non-story at a time when other top leaders are retired,” said a long-time PAP watcher.

At any rate, it seems that the importance of whether Lee stays or goes has become less important, overtaken by Singapore’s fast-changing politics.

The electorate is changing; so is the PAP itself, so Lee – because of his health and age – is no longer very important to many people.

The election (Polling Day: May 7) is shaping up to be one of the hottest in decades that threatens to shake up the powerful PAP that Lee co-founded.

A gradual build-up of public unhappiness is contributing to this.

Years of excessive intake of foreigners that threatened white-collar jobs and depressed salaries of middle-class Singaporeans – as well as high inflation – are creating strong resentment in the republic.

Singaporeans are worried about the future of their children and their country.

The PAP is not facing defeat, not in this election anyway, far from it. It will undoubtedly retain its mandate to govern for another five years.

The party probably has enough momentum of past – even brilliant – successes to let it win this election, especially with Lee around. The next one, well, that’s another story.

With nine days of campaigning from noon of nomination day (April 27), people are gearing for an erosion of popular support for the government.

But under Singapore’s “first-past-the post” system, it will be much harder to win many more seats.

More worrying for 59-year-old Prime Minister Lee Hsien Loong is the prospect of losing the hearts and minds of youths, who are less accepting of his policies.

Some analysts believe that this is one of the reasons why his father, MM Lee, wants to stay on despite his health.

“He wants to ensure the PAP, with a large crop of new, inexperienced candidates, does not falter during its crucial self-renewal,” a grassroots leader told me.

That he intends to serve an 11th term in Parliament is welcomed by a section of the population, especially the elderly, that feels indebted for his role in building today’s Singa­pore.

“The older voters may be happy and feel a strong sense of comfort that he’s still there,” said a political think tank researcher.

One admirer wrote: “MM Lee, I salute you for what you and your team had done for Singapore. Without doubt, the PAP team put nation before self.”

Heart Sense said: “Dear Mr Lee, you are a great man of our nation and many Singaporeans have gained their success and prosperity from your earlier policies.”

Both admirers, however, said they felt that his successors were generally less capable and as a result life had declined.

The younger generation, which has no first-hand knowledge of Lee’s past achievements, blames him for much of today’s woes and wants him to retire.

Immediately after Lee announced he would contest, a popular website polled readers for their views.

Two main reasons given for wanting him to quit are firstly, to let the younger leaders to take over, and secondly, they don’t like his mega-high salary.

The other 16% say he should continue.

One was Angie, who penned: “I want Mr Lee to continue to be the MP and stay as long as he can. Without him, we will never be able to enjoy what we have today.”

Since his wife’s death, Lee seemed more conscious of his own fallibility.

Asked by an American journalist, “So, when is the last leaf falling,” Lee replied: “I can feel the gradual decline of energy and vitality. And I mean generally, every year, when you know you are not on the same level as last year. But that’s life.”

For this election, knowing his past, he is likely to campaign hard for his son’s – and PAP’s – victory, his health permitting.

Given his stature, he will likely be able to pull in a number of votes from Singapore’s conservatives who fear sudden changes.

But his ageing body and mind will weaken his role in the next five years, if it lasts.
By taipingmali at April 23, 2011