Muhyiddin: Barisan has reduced poverty in Sarawak to mere 3% 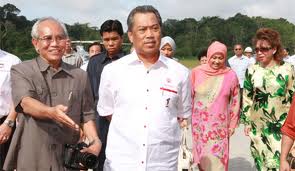 BINTULU: Tan Sri Muhyiddin Yassin said the Barisan Nasional government has spent tens of billions of ringgit to eradicate poverty in Sarawak compared with the mere RM1bil promised by the Opposition pact in their Sarawak state election manifesto.

He said the Barisan government had reduced poverty in Sarawak to merely 3% currently compared with 60% to 70% 20 years ago.

“At a glance, the offer (by the Opposition) is impressive, if they are truly serious, allocate RM10bil because we have given more than that,” he told reporters after a 30-minute walkabout at the Bintulu Main Market, here on Saturday.

He said the establishment of the RM1bil Poverty Eradication Fund to look after poor families in the Pakatan Rakyat manifesto was merely a promise made to win the support of the voters in Sarawak and it could actually not be implemented as was the case in Selangor, which is under PKR administration.

Muhyiddin, who is also Education Minister, said the ‘one-off’ payment of RM200 to every primary school pupil entering Year One was also low compared with the free education given by the Barisan government to primary and secondary school students, which costs about RM5,000 per student. - Bernama