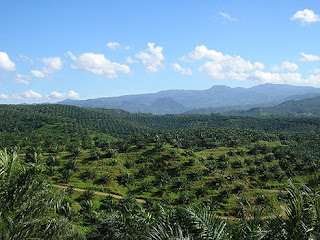 KUCHING, April 9 (Bernama) -- Sarawak is the final frontier of the Malaysian oil palm industry, a major source of revenue that is strategic to rural development, according to planters in the state.

Although the industry in Sarawak which started in ernest in the late 1980s has yet to realise its full potential, it has already brought great benefits to the state, including infrastructure development in the rural areas, they said.

"If not oil palm, what then is the alternative for rural growth and economic development in Malaysia?" he said.

Oil palm has been planted on 1.1 million hectares of state and native customary rights land, whose owners enjoy a share of dividends.

The state government has earmarked two million hectares or 15 per cent of state land for oil palm plantation.

Hamed recalled that oil palm was the economic security crop for Malaysia during the Asian financial crisis in 1997-98, when it was one of the most important sources of foreign exchange.

"The industry adopts sustainable practices using standard operation procedures to ensure that it will continue to bring prosperity to the state," Hamed said.

He said the association worked closely with the Malaysian Palm Oil Board and research organisations to make certain that good management practices and the sustainability approach were observed.

"We look forward to working with the government in setting up a dedicated oil palm plantation institution in Sarawak to develop all the skills the industry needs," Hamed added.

Right now, there was a shortage of workers, making necessary recruitment from outside, he said.

Ho said that plantations had a lifespan of over 30 years per cycle.

Projecting future income, he said: At an average of 25-30 tonnes of fresh fruit bunches per hectare and at RM700 per tonne, two million hectares can generate around RM35 billion annually to the state."

From 2001 to 2009, he noted, the oil palm industry in Sarawak contributed RM916 million to the tax revenue of the state.