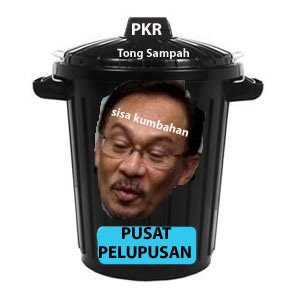 Kota Kinabalu: Sabah Progressive Party (SAPP) said PKR no longer serves any purpose being in the Pakatan Rakyat opposition coalition because it is proven they could not deliver Bumiputera votes and rural seats.

Former PKR leader, Datuk Nahalan Damsal, said the three seats won by PKR in the recent Sarawak election were due to other factors.

"The Bakalelan seat was won by Baru Bian due to his strong personality, good record and financial backing," he said.

"Ali Biju won the Krian seat because of his good local networks, big family and strong financial resources. As for Batu Lintang, it was a gift from the DAP to the PKR," he said, adding that PKR virtually lost in the 46 seats it contested.

Nahalan was formerly PKR Batu Sapi division head and was PKR candidate for Sekong State constituency in the 2008 general elections.

It was during the period that he came to know only few Bumiputeras actually supported PKR.

"That is why I proposed to SAPP President Datuk Yong Teck Lee to contest in the Batu Sapi by-election last year," he said.

"However, PKR broke the friendly agreement with SAPP due to greed.

In the Batu Sapi by-election that was won by the BN, Nahalan said the Bumiputera votes that PKR garnered were only half compared to that obtained by the SAPP.

"The Chinese who had voted for me under PKR in 2008, had swung away from SAPP to PKR because of the last minute campaign against SAPP by top PKR and DAP leaders from Kuala Lumpur," he said.

On other developments, he said the culture of internal conflicts in PKR was still rampant. Citing the case of Dominique Ng, the founder of Sarawak PKR and the only PKR candidate who won in Sarawak election in 2006, he said Ng was humiliated when the party dropped him at the last minute.

But if the PKR don't consider Ng good enough as candidate for the state seat, "why would (they consider) he be good enough for Parliament?" he asked.

Ng's is a case of dishonesty, divisive politics, internal conflicts and factionalism practised by PKR everywhere including in Sabah, he said.

Nahalan said it is for this reason he strongly urged the people in Sabah, especially Bumiputeras to join forces in SAPP to fight BN in the coming general elections.

He said PKR could take pride that it was represented by a multiracial setup with one seat each won by an Orang Ulu, an Iban and a Chinese.

Also, almost half of the 55 seats won by the BN saw the margin of win decreasing. "These were mostly in the Iban and Orang Ulu areas," he said in a statement.

That itself was another wake-up call for the coalition, that it cannot take indigenous votes for granted.

"The Ibans, especially, are angry over the NCR or native customary rights land issue. Over the years, they feel they have been marginalised," he said The BN's share of the popular vote dipped to 55 per cent from 63 per cent in 2006, which meant that Pakatan Rakyat has more than 45 per cent of the popular vote in Sarawak, he said.

He said the margins by which some of its candidates in the Chinese seats lost to DAP and PKR were stagerring. "That was the extent of the Chinese frustration in Sarawak's urban centres."

In Padungan, an urban seat in Kuching, DAP's majority increased from 1,417 in the last election to 7,884 while in Batu Lintang contested by PKR has a majority of 8,381, the second highest after DAP state chairman Wong Ho Leng who retained his seat with a 8,827-vote majority.

"It was a protest vote against the leadership of Taib (Sarawak Chief Minister)," he said adding that they Chinese felt they had been pushed to the limit.

Dr Chia said the BN cannot be complacent despite its comfortable two-thirds majority. If the Sibu by-election last year was a signal of what would happen on April 16, then Saturday's outcome is a warning of what might happen in the general election, he said.

"The urbanites especially the Chinese want to see change and reform in the government and that includes the exit of old faces in SUPP and of course the eventual retirement of Taib," he said.

The changes, he said, would have to take place before the next general election.

The constituencies of Kuching and Sibu are already in DAP hands, he said adding that other parliamentary seats in danger are Sarikei, Miri, Lanang and Stampin.

The shakiest is Sarikei in which Barisan won by only 51 votes in the 2008 general election, he said.

Federal leadership he said cannot be blamed if it seems over-eager about pushing for a leadership transition in Sarawak.

Sarawak's fixed deposit tag he said does not seem as secure as it used to be.

In retrospect, he said the election result in Sarawak will definitely see a greater gains by Pakatan Rakyat in Sabah.
By taipingmali at April 21, 2011