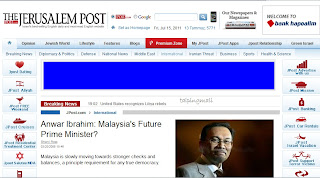 Malaysia is slowly moving towards stronger checks and balances, a principle requirement for any true democracy. Malaysia's opposition parties made significant gains in the parliamentary elections held on Sunday, March 8. Their success demonstrated a growing desire for political change and the furthering of democracy in Malaysia. The election result means that the ruling Barisan National (National Front (BN)), no longer has a two third parliamentary majority. This means that its power has been limited in some respects, for example it can not amend the constitution or make key appointments without support from the opposition. Ultimately, the election results means a stronger system of checks and balances, a principle requirement for any true democracy. The largest of the opposition parties, the Parti Keadilan Rakyat (People's Justice Party (PKR)) won 31 seats, a significant gain compared to the single seat it won in the 2004 elections. The PKR's success has been attributed largely to the revival of former Deputy Prime Minister Anwar Ibrahim's political career. As a proponent of moderate Islam, cultural and religious impartiality, and liberal democracy, Anwar's popularity is gaining strength, with some reports suggesting that should the opposition coalition win the next election, he may well be next in line as Malaysia's Prime Minister. Anwar launched his political career in 1982 by joining the United Malays National Organization (UNMO), currently the largest party within the ruling Barisan National (National Front (BN)). The UNMO was led by Mahathir Mohamad, Malaysia longest-serving Prime Minister. By 1991, Anwar was appointed Minister of Finance after which he was appointed as Mahathir's Deputy Prime Minister in 1993. Anwar's term as Minister of Finance was characterized by unprecedented economic prosperity and growth, awarding him widespread acclamation. However, his political career came to an abrupt stop when he voiced strong opposition to Mahathir's support for the Bumiputra ('Sons of the Soil'), programme. This opposition led to criminal convictions for corruption and sodomy (the sentencing was 6 and 9 years respectively, although the sodomy conviction was overturned in 2004). Despite, if not because of his criminal convictions, Anwar became an icon for political progress, justice and equality. He maintained considerable support throughout the years largely because of the work of his wife, Wan Azizah Ismail, who established the PKR in 1999, to call for her husband's release. The PKR also kept Anwar's political reforms (the latter becoming known as 'reformasi') agenda alive. Since his release from prison, Anwar has sought to revitalize his political campaign by challenging the current government, headed by Prime Minister Abdullah Badawi, on a host of issues, in particular the 'New Economic Policy'. Created in the late 1970s (currently termed the National Vision Policy), the policy intended to create conditions for national unity by reducing interethnic disparities, however in practice it granted the Bumiputra preferential treatment, creating an increasing ethnic Malay middle class and thus substantial opposition from ethnic Indian and Chinese who did not reap the benefits. Anwar has been awarded acclaim by many for his success in creating unity amongst the previously divided opposition parties, which resulted in a coalition that won an unprecedented total of 82 seats out of parliament's 222 seats in the latest election. Considered to be one of Malaysia's most charismatic speakers, Anwar's endorsement of PKR's political platform is gaining significant momentum. In February 2008, the PKR published the Keadilan Manifesto titled "A New Dawn for Malaysia," detailing the party's vision for putting Malaysia back on a track of economic, political, educational and cultural prosperity. Centering on five central positions, the party first and foremost advocates for a constitutional state for all whereby Â³bumiputera rights are guaranteed fully alongside with non-bumiputera rightsÂ² and thus creating non-racial based politics. With a growing percentage of the population unsatisfied with the political status quo, the PKR's reform agenda, as advocated by Anwar, appears to be the change that Malaysia increasingly desires. Anwar's political ban is due to end in April and if reports hold true, he will easily win a by-election and resume a parliamentary role after his wife expectedly vacates her seat. The main obstacle that analysts suggest is that once Anwar formally re-enters politics, he will need to continue to prove his political competence and ensure the long time fragmented opposition parties sustain a successful coalition and thus an effective governance implementing reforms within the states in which they hold a majority. Should they do so, analysts further predict that the opposition coalition may have a strong chance of defeating the ruling party in the 2013 elections, thus likely placing Anwar as the forerunner as Prime Minister. Shani Ross is the Coordinator for the Executive Programs & Conferences at the International Institute for Counter-Terrorism (ICT), Interdisciplinary Centre Herzliya, Israel.
By taipingmali at Julai 16, 2011